Empire State Carousel: A Museum You Can Ride On

The Empire State Carousel is a carnival ride, an ongoing work of American folk art, a timeline of New York State history, and an expression of the state’s diversity.

First conceived in 1983 by head carver Gerry Holzman and guided to completion by him, the carousel and its hand-crafted band organ were donated to The Farmers’ Museum by the Empire State Carousel Association. Featuring original contributions by over 1,000 New York volunteer artisans and artists, it opened on Memorial Day 2006. The Empire State Carousel is housed in a twelve-sided building built specifically for the carousel.

Our carousel is a beautiful example of a traditional country fair ride. Called “a museum you can ride on,” it has 25 hand-carved animals representing the agricultural and natural resources found in New York State. In addition to the beautiful hand-painted animals are a scallop shell (the state shellfish), an Erie Canal boat, and an original lover’s tub.

Eight-foot curved murals depict moments in New York State history, from the arrival of the Half Moon to the construction of Levittown. The hand-carved frames around the mirrors showcase eleven different regions of New York and carved place-names highlight towns all over the state. Even the sweeps of the carousel feature over 300 feet of hand stenciled state symbols: the bluebird, rose, apple, sugar maple leaf, and state map!

Take a Closer Look at the Empire State Carousel!

Charlotte Chicken represents the Leghorn breed, which is prized for its prolific egg laying. Carved by Gerry Holtzman and painted by Jill Irving, she represents the poultry farms of New York on the Empire State Carousel. 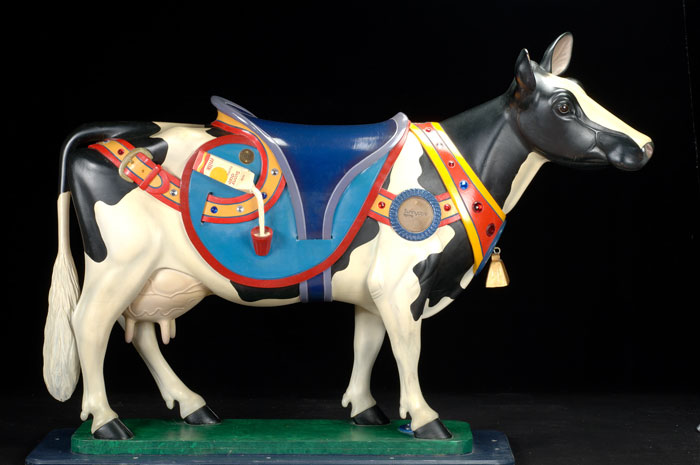